Now that Ramzan/Ramadan/(however you chose to call it) is here, the foodie in all of us craves for the mouth-watering deals and platters that are offered by all restaurants. Tis the season to pig out my friends! (Lets be honest, pig out is EXACTLY what we want to do when going out for Iftaar) Gotta get my money’s worth. YEAH!

We took a few days to compile this list because good, objective reporting DEMANDS that we eat at each of the restaurants to figure out what’s what. And also, it gave us a good excuse to eat out on company money! Mwahahahaha!!

Ramzan is the season where ALL the restaurants offer some sort of deal for Iftar, and now most even offer something for Sehri as well. It’s because they now have a very limited window to win over your patronage and make some moolah. So there are innumerable deals out there for you to choose from. And since it will be impossible for us to list all the countless places (that is what innumerable means), we’ll just stick to mentioning the most favourited, and the most popular in each price range.

Lets start off with our high-end, fancy shmancy, food places first. Marriot and Serena definitely take the cake when it comes to over-the-top pricing and food. They both have excellent food and a great variety, and they’re both around the Rs3000/- mark. Marriott is just under three grand, and Serena is just over. But hey, you get the chance to win a 7-seater car in a lucky draw at Serena! The really good thing about places like Marriott and Serena is that they have SO MUCH on the menu. 12 or more main dishes, live stations, 5 or more salads, all sorts of desserts! It’s a foodies’ nirvana!

The fan favourites for some years now have been Tuscany Courtyard and Monal. Tuscany is only slightly less expensive than Marriot but they offer a good variety of great tasting food like Gratin Potato, Spicy Thai Pasta, Casserole and Prawn Tempura. All in all, LOTS to choose from at the buffet table so worth the high price. Same goes for Monal, and also Tree House. At just around the Rs2000/- mark, you get a lot of choice and spectacular views of Islamabad. Be sure to get there well in time because parking there is a (insert halal swear word). But if you’d rather skip the parking hassle and you don’t particularly care for the view while gobbling down your food, we suggest you go over to the Monal Marquee. Almost the same food (less 2 dishes) for only Rs1295/-(plus tax, so around Rs1520). Even 1969 (& time goes on) has pretty impressive buffet spread, though its Rs1969/-(but of course!) without taxes.

Eating Tip: Since most of the Iftar Dinner buffet deals have over 25 food items, you should be very smart about how you eat. Never have a lot for the actual Iftar. Dates, drink, and ONE pakora should be enough! Remember you are paying good money for the actual food, not the fried appetizers that will kill your appetite! Also, take bite sized portions of all the dishes first. It’s a buffet, they WILL refill it (unless they’re a cheapskate restaurant)! So there’s no need to hog the buffet table or make a mountain on your plate! Have some manners! Also, pace yourself. See what you like after tasting it, have a few sips of water, talk to other people on your table (you’ve invited them for their company, remember?). Then go for more helping of your favourite item. Repeat for desserts.

When it comes to Chinese, most of the lamian/ramen places we visited were closed, but the regular restaurants were open. China Town (Rs 1635 including tax) has a pretty decent menu, though it only has 3 Chinese dishes and 2 Thai. But it has a good variety when you account for Continental, desserts, and Iftar. The food though, kinda average. Nothing to write home about. The newly opened Asian Wok in Beverly Centre has a pretty impressive offering as well, though it’s more expensive. For Rs 2230 (including taxes) you have the choice of 10 Chinese and Thai dishes in the main cuisine, not to mention choices in soups and rice and chowmein. And the food tasted really good! (I’m a sucker for noodles)

If you’re in the mood for an all-out desi iftari with some heavy, artery-clogging, robust, tasty food in mind then Chatta’s in F10 (Rs1340/-)  is the place you want to be. Their Palak Paneer is sublime and Desi Ghee Daal Maash is incredibly tasty. Speaking of heavy, artery-clogging food…you HAVE to try nihari at Delhi Darwaza F8 and Mohammadi Nihari I10! Vastly different price ranges, but both have great tasting nihari. BBQ Bazar (Rs1700/-) offers a protein rich iftar with lots of meat accompanied with the customary rice and roti, but they also throw in a googly with Chicken Chowmein(?!)(what the whaaa…??).

In our observation, any decent Iftar/Dinner buffet will cost anything between 1500-2000, taxes included. Which is not bad if you think about it. A full dinner at any good restaurant, on normal days, would cost you at least 1500 per person if you include drinks and desserts. In Ramzan you get the added advantage of choice and free refills because it’s a buffet!

To help you in choosing where to eat an iftar buffet, here’s a table; 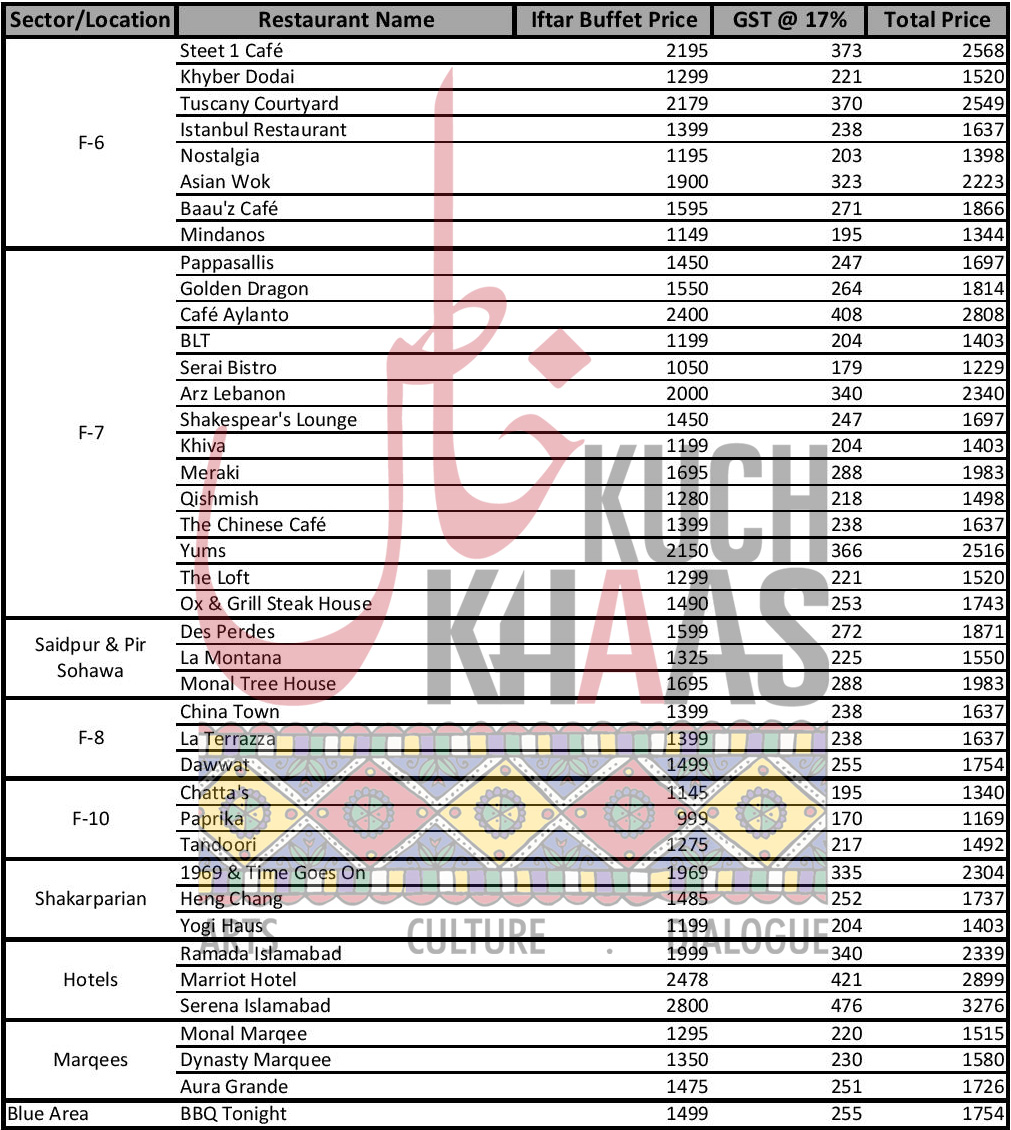 Apart from the Iftar buffets, we’re also rather spoiled for choice when it comes to Iftar platters. Any restaurant that is not offering a buffet, is alternatively offering an Iftar platter. So this way you can have your enticing desi Iftar right before you dive in to your favourite entrée at the restaurant.

My personal favourite iftar platter so far is by Texas Stake House in E7. ITS FREE!! You get buffalo wings, pakoras, samosas, mini sandwich, a bowl of fruit and a drink. And its free if you order a main dish! The only other free iftar I had was at Tiger Temple. With their generous serving of whatever food you ordered, you first get a small bowl of dates for iftar. How quaint! (NOT)

Khoka Khola offers dates, fruit chaat, pakoras, dahi ballay, special chaat (no idea what that is since I haven’t been there this year, mostly because its really hard to find a table there)(its probably channa chaat)(who knows) and Rooh Afza for a slightly steep Rs640, including taxes. Mocca’s platter is even more expensive (Rs1060, all included) but is “a hearty platter” that has fish sticks, grilled chicken, mini sandwiches and 1 item from the bakery (either a macaron or a carrot/banana cake). District 6 in F6 Markaz also consists of the usual line-up but with the added Shami Kabab, Spring Rolls, and a meat item for Rs650+tax. And though District 6’s iftar platter is tasty and fulfilling, it’s the regular stuff on their menu that is the real winner. Everything we ordered on our table tasted really good, with the exception of the Croque Monsieur. Crema has the best tasting Croque Monsieur so far.

Loafology (Rs 995+tax) and Browns café (Rs1300+tax) have an elaborate Iftar platter with burgers and whatnot but they’re good enough for 2 people. Jessie’s in F7 also has a pretty good Iftar platter. For around Rs1170(tax included) you get fruit, samosa, chicken roll, kabab, lemonade, a burger, fries with dip, and a soft drink. And if you still have space left after that, we suggest you order the steak.

Eating Tip: Logically speaking iftari platter is just so that you have something to break your fast with before you move on to the main dish. So be smart and order the platter to share (waste not, want not). The more expensive the platter, the more items it will have. Hence, making it easier to share.

So there you have it folks, our two cents about what where you can go to stuff yourself this Ramzan. Just know that we are not to blame for your weight gain during Ramzan, it was all you. Happy Feasting!